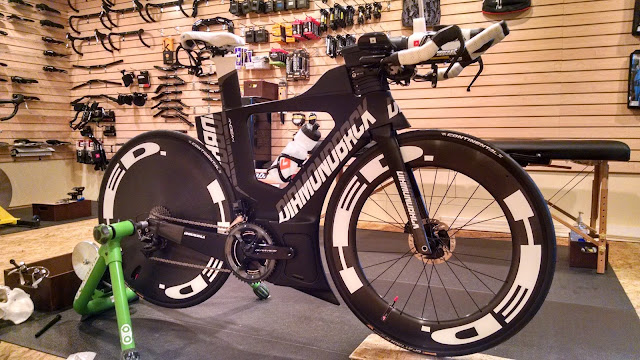 Recently, I posted a couple of teaser pics of a bike on Facebook.  I get the opportunity to work on some fun projects in the studio, and today's project is a brand new Diamondback Andean custom-ordered on behalf of a customer.  Aside from being a really interesting bike, the reason I wanted to write about this is because of the packaging: Diamondback is making some waves in the industry with their approach to direct-to-consumer bike delivery, which involved rethinking and retooling their shipping department to allow a consumer to receive a bike that's basically ready to ride.  Let's take a look at how they are doing things differently and if this is something that the end customer can comfortably assemble and ride safely.

I've had the opportunity to assemble a lot of bikes when I worked part-time at LoKe Bicycles in Fishers for a few months in 2016.  Bikes destined for the bike shop arrive in a similar state of assembly - the box is as compact as it can be, the bike is well-padded and there is quite a bit of assembly to be done.  I am certainly not the fastest mechanic, but most bikes took anywhere from 45 minutes to an hour and a half to assemble.  LoKe has a really solid process documented for the assembly of every bike, from the tiniest of kids' bikes to the high end racing machines.  The process includes truing the wheels, ensuring the brakes and drivetrain are all working perfectly, cleaning and polishing everything, and ensuring everything is tightened and torqued to spec before it's put on the floor or delivered to a happy owner.

Diamondback wants to change that process (well, not the happy owner part) with a direct-to-consumer model, essentially eliminating the local bike shop.  For the bike shops, this doesn't sound like good news, but this is the way of our world now.  Good or bad, this is an option for consumers.  I'm all about consumer options, so let's look at this one.

This bike was for a customer, who we'll call Roger Shrubber.  Roger came to me for a MATCH bike sizing, where we discussed his goals and ideas for a bike, we sized him up using the F.I.S.T. protocol, and came up with a list of bike solutions that fit him along with his measurements.  In my opinion, this is the only way to buy a bike - find your happy place in space and put the right bike underneath you.  Roger's list included quite a few options, and he had been particularly intrigued by the Andean.  With his fit information in hand, he went to the Diamondback Custom Studio website and built his Andean the way he wanted it, even down to using the same aerobar extensions and saddle that he was sized up on.  There was one small hitch in the plan - we sized him up for 165mm cranks, but they were in short supply.  After a bit of discussion with the folks at Diamondback, we convinced them to allow us to install a crankset from a different source, making a rare exception of not delivering a complete bike.  So, what you see here is a bit of an anomaly, and it was nice that Diamondback trusted us to finish the bike.  With that, the bike was on it's way, shipped directly to me so I can have it ready to go when Roger comes in for his fit.

I picked the bike up at the local FedEx store.  The first thing that the guy behind the counter said to me was, "dude, your package is huge - let me get you a cart."  He wasn't kidding.  The box measures approximately 45" long, 37" tall, and 21" wide.  It's a bit cumbersome, so thank you Mr. FedEx guy for loaning me a cart. 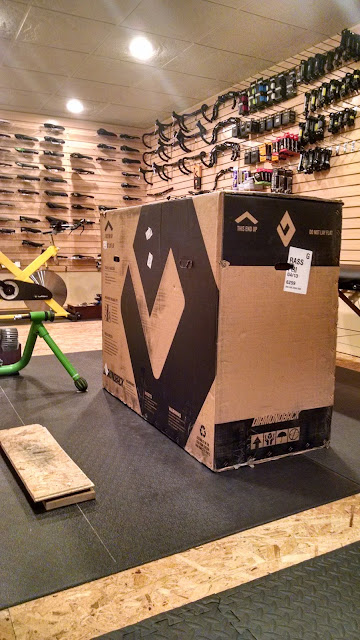 Once the bike was at the studio, it was time to start the unboxing process.  The top has three tabs, and 4 layers of cardboard.  Opening the top exposes the bike, and the first thing you notice is that the handlebars are completely installed, which is part of why the box is so wide.  The aerobar extensions are detached, and packaged vertically right in front of the head tube.  Roger opted for HED wheels, which are packaged on either side of the frame.  An unmarked box sits on top of the back part of the frame and the seatpost sticking out of the bottom of it suggests what is inside. 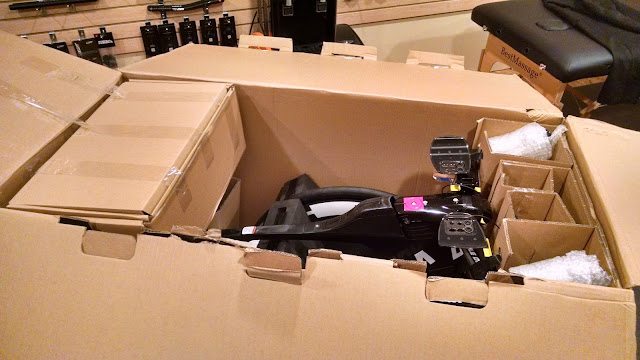 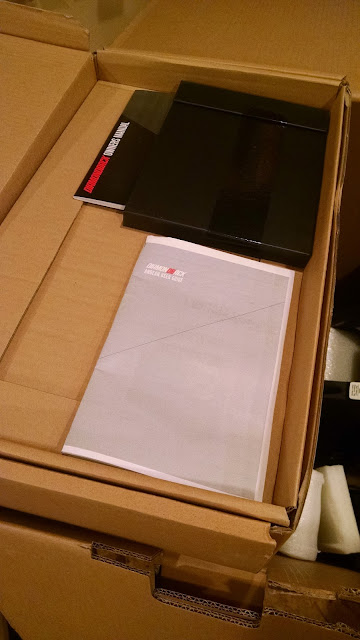 Digging a bit more into the box, we find the saddle is installed on the seatpost, the bottle cage, and a few other parts and accessories, including a full set of spacers and bolts for the aerobars, which are the Profile Design Aeria, in this case.  Also, because of our special order, the Shimano chain was in here in the original packaging. 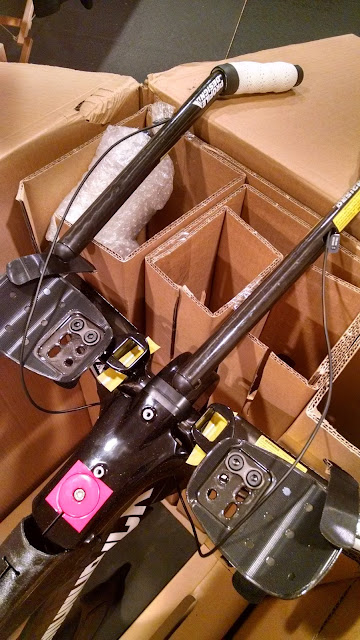 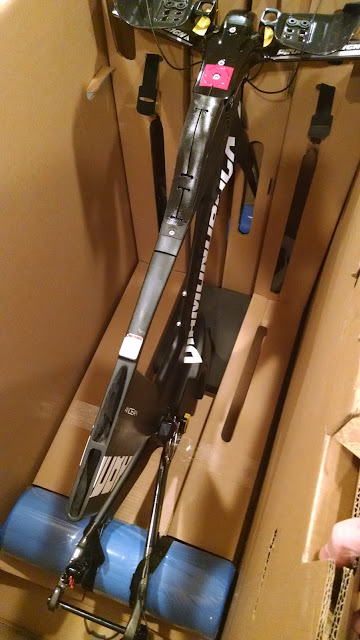 Following the instructions in the User Guide, we remove the velcro straps securing the base bar and wheels.  I pulled the wheels out first, the rest of the cardboard pieces, and finally the frame.  Tucked away near the front of the bike were the Profile Design accessories Roger ordered. 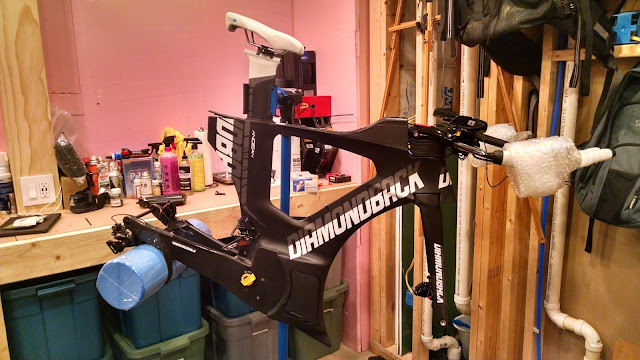 At this point, I'm ready to put the bike together and would like to put it in the bike stand.  The problem is that I can't find the seatpost binder clamp.  Digging around, I'm starting to panic a bit when I realize the unmarked box has a secret compartment, with a whole pile of more goodies, including the seatpost binder clamp.  Crisis averted.  We hit the jackpot - along with the binder clamp, we've got the Di2 charger and plug tool, a torque wrench, thru-axles, an extra rear derailleur hanger, and a bunch of other stuff.  The good news is we've got lots of stuff! 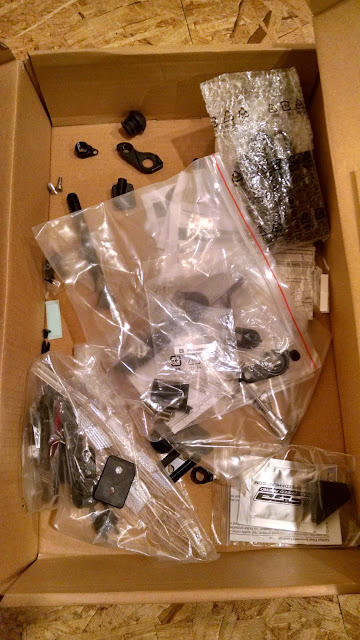 The bad news?  Umm, we've got lots of stuff!  This is starting to look like a bike that the average consumer might not be able to assemble.  I get the impression this would be pretty intimidating for a new owner thinking they're going to get a bike that's almost ready to ride.

Nonetheless, we continue.  After installing the binder clamp, I put the bike in the stand for assembly.  Removing the last bit of packaging, I realize that when they describe the packaging that protects the rear part of the frame as a foam roller, they actually are including a real foam roller!  A quick look inside the box again, and the piece of foam that was used to protect the bottom of the fork is a pull buoy.  Way too fun - what a neat idea! 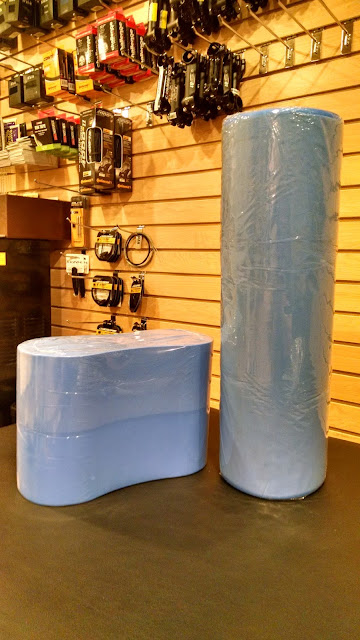 Since this bike was a special order without a crankset installed, the installation process was a bit more complex than what most folks will be faced with.  Basically, when you get this bike, you have the following to do:

Most of these steps are things a triathlete or cyclist will have to figure out eventually, but may not be comfortable doing themselves.  It seems like a lot at first, but Diamondback does a pretty good job of making it all as easy as it can be - the instructions are good, they provide things like carbon paste for the seat tube, etc., and also include a torque wrench so you can get it right.  It is nice to have a work stand and all the tools, but you could get by without. 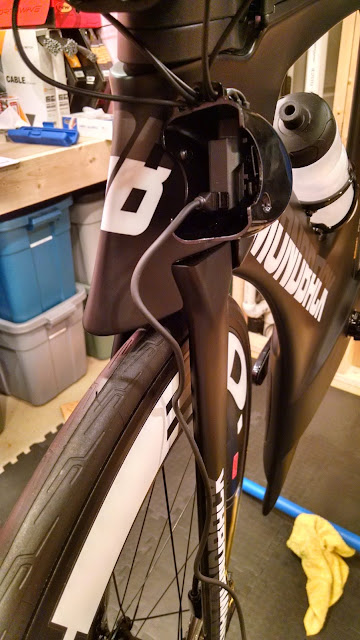 For this specific bike, aside from the crankset installation, there were a couple of changes we ended up making.  When the bike arrived, Diamondback had set the pad stack and reach to be pretty close to what we had indicated online.  In this case, because Roger had selected the Profile Design Aeria cockpit, we had the ability to set it up a bit differently than Diamondback did.  Diamondback favored their stock stem spacers, while we chose to take those out and use the Aeria's pad/extension risers to get our desired position.  We felt it made for a bit cleaner front end, and frankly, looks a little cooler, too. 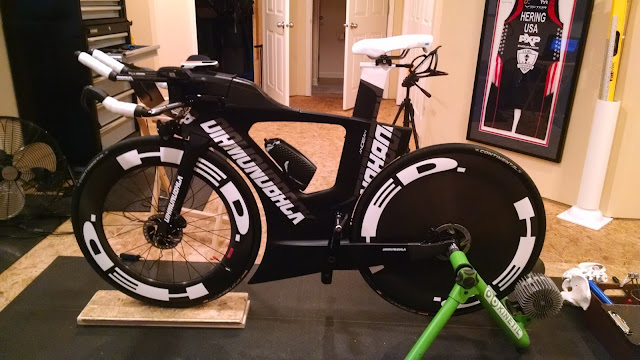 We also chose to swap out the round frame-mounted bottle that came with the Andean for an Elite Chrono bottle, which is a bit smaller, but makes for a tidy setup that is easier to get out of the cage.  As an added bonus, it matches the color scheme quite nicely, too.  If I were to use a traditional bottle on this bike, I would opt for a side-load cage to make it easier to get the bottle out.

Finally, we are looking to make for a smoother front end flow of the hydration system to the stem/storage box.  I am using Autodesk Fusion 360 to design a 3D-printed bracket to mount an FC35 on this bike.

With all this said, what does this bike and its gigantic box mean for the bike shops?  Diamondback is one of several brands working to make direct-to-consumer sales work.  I just got an e-mail the other day from Quintana Roo the other day where they were talking up their new packaging.  Talking with some of the bike shops in my area, many have realized that they need to adapt - maybe they aren't getting a new bike sale, but some are starting to offer an "Internet bike" assembly service, with some even supporting having the bike shipped directly to them for final assembly for the customer.  In my opinion, this has the potential to be a fair trade-off - make a little bit of service money without having the inventory/storage costs - although there might be some questions about how to handle any issues that come up, such as "what happens if the bike is damaged?" or "what if parts are missing?"

As Bob Dylan said, the times, they are a changin'.  As more manufacturers move to direct-to-consumer, will the local bike shop die off?  Only time will tell, but I think your LBS is safe for now, if they are willing to evolve with the marketplace.
Posted by Vector Cycle Works at 3:02 AM