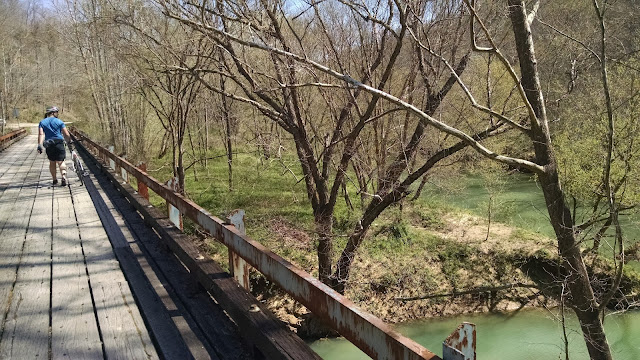 After a pretty scary crash warming up for a cyclocross race in October 2016, I lost all desire to compete anymore, and decided to retire from racing - if you can call "no longer competing at the back of the pack in events I pay for" on par with "retiring from racing."  One of the main drivers for my racing was that I wanted to race in all 50 states plus 10 other countries, mostly because this set things up for "racecations" - a way to take the family to fun places that we might not otherwise consider.  It's a pretty simple deal - I get to go out and beat myself up for a day, and then we relax and have some family fun for a few days.  Everybody wins.  We've had a lot of fun in the process, and had hit 11 states before my accident.  Although I might not be racing anymore, I still want to continue creating good memories.

So, being a bit sidetracked, the goal has been tweaked: a metric century or longer in all 50 states and 10 other countries.  The attitude is different - I'm a tourist now.  The goals are simple: To take in the sights and experience.  To explore new places and new cultures, at a speed that allows one to take it all in.  To find peace through mileage.  To enjoy just riding a bike for the rest of my life.

These goals are not unlike the majority of the customers I see in the fit studio.  For many of us, there's something special about riding a bike - maybe it's the sensation of the speed and wind, or maybe it's a way to revert back to childhood, when a bike was our first real vehicle.  Whatever it is, it's a good feeling when you find it.  For some odd reason, I feel a need to share these experiences with you, in the hope that you might be intrigued by the events and participate someday, too.  I'm here to inform.  So, I hope you enjoy the first of what I hope will be many "Sidetracked" ride reviews.

The first event in this quest was the Redbud Ride in London, Kentucky.  I have known quite a few people who have spoken highly of this ride, it's not too far from home, and the timing was good - the Redbud Ride is held on a Saturday towards the end of April every year, and this year it fell on April 21.

The Redbud Ride consists of 4 different length routes in the hills of central Kentucky, all starting in downtown London, with the longer routes taking you into the Daniel Boone National Forest:

If you have some extra time to make a long weekend out of it, there are two additional events:

The three rides together really make for a nice way to explore central Kentucky.  In retrospect, I wish I would have planned for the additional time.  When you register for the event, you don't select a specific route - you choose whatever route you feel up to.  I had planned on doing the Green Route to get in my metric century.  This was a bit aggressive, considering my longest ride of the year so far had been just over an hour on the trainer with Rouvy.  It's also a bit aggressive in the sense of the terrain - coming from central Indiana, we don't have much for hills.

I chose to do this trip solo, as I had a bit to learn about being a bike tourist.  I also didn't have a lot of extra time - head down after work on Friday evening, spend a night at a hotel, ride on Saturday morning, and return Saturday evening so I can be back in the fit studio on Sunday.  This was a bit of a whirlwind adventure, which was made quite a bit more adventurous by picking up a nail in my car tire somewhere south of Cincinnati.  That's a story for another time involving tire sealants, taxidermy, croissants, and a language barrier.  While I didn't get much sleep and at one point thought I would miss the ride in order to get my tire fixed, it all worked out pretty nicely in the end.

I had only been through London, KY, once before and happened to stay in the same hotel as last time.  I wasn't sure what the locals might think of cyclists coming into town for an event like this, but found that the few locals I interacted with seemed to embrace it.  The locals were friendly and accommodating.  The hotel even started breakfast earlier than normal so Redbud Ride participants could fuel up and get to the start in time.

The ride starts at 8 AM, although it's an open start time - you can really start any time until around 10 or 11, as long as you get to certain points in time.  Since I spent the first part of the morning in the tire shop, I didn't actually get to the start of the ride until after 9 AM.  Fortunately, some friends happened to be at the hotel and planned a bit later start due to the brisk temperatures (it was in the low 40s when we started out) and we rode to the start together.  They had already signed in and were doing the 100 mile red route, while I was doing the green route and still needed to sign in.  We went our separate ways, and I ended up riding most of the ride by myself.

The route was very pleasant, well-marked, and well-supported.  Spring has been a bit slow to arrive this year, so the signature Redbuds weren't in full bloom quite yet.  Matter of fact, the trees were all still pretty bare, with hints of green and a few Redbuds just starting to bud.  Regardless of the season, it is very pretty territory.  The first few miles are in London proper, but it's not long before you start getting into rural areas, and you soon find yourself on some very quiet backwoods roads, following along rivers, with glimpses of waterfalls, rock formations, and some rather interesting local culture.

The roads were very good and the routes were well-marked.  Since I had a late start, I didn't get a feel for what kind of crowd was at the 8 AM start time.  I am not aware of how many riders actually participated.  Printed maps were available at the start, but the roads were well-marked enough that I really didn't need the map, other than maybe for the first few turns in town, which happen in fairly quick succession.

The event provided SAG support, and for much of the ride, the majority of the cars I encountered were the SAG vehicles.  I was amazed at just how many people volunteered and helped out with the event - from the SAG, to the rest stops, to the volunteers at the start and post-race party, and even a few folks helping to guide on course, there were plenty of volunteers.  The locals were friendly, and I found myself waving at a lot of folks along the way.

The Redbud folks also did a really nice job with the rest stops, which were located every 10-15 miles apart.  The food was plentiful with lots of choices from fresh fruit, to various homemade goods like brownies and cookies, to pizza.  There were a couple of flavors of Gatorade and water, too.  The food was served under tents and chairs were available to rest and hang out with friends.

I didn't get any pictures along the ride other than the picture at the top of this article.  Immediately after the second rest stop, there is a bridge that you are required to walk across, due to the gaps between the planks on the bridge being just wide enough to catch a tire.  The ride is also fairly hilly, with most of it gently undulating, with a few flats and a couple of bigger climbs thrown in for good measure.  There were two fairly challenging climbs, with the lesser of the two at around mile 11 and the biggest climb around mile 31 of the green route.

Overall, I found this to be a really enjoyable event, and would certainly recommend it to just about anybody - the 4 different ride routes provide whatever challenge you feel you can handle.  I do have a couple of things I wish I would have done differently: Since my tire adventures threw off my schedule a bit, I didn't get nearly as much time in London as I would have liked, and I'm not sure what London had to offer for the family to do.  Perhaps some others can chime in in the comments below.  I also didn't get to partake in the start when a majority of people started, so still have no idea just how big the event actually was.  I personally like a lack of crowds, and enjoyed just being alone with my thoughts and the wind for a few hours on a beautiful Kentucky Saturday.  The Redbud Ride has certainly set a high bar for my expectations of rides going forward.