Allow Me to Introduce Myself - Meet Your Fitter 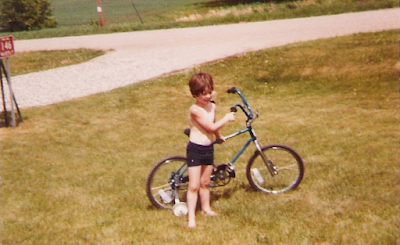 There are a lot of great bike fitters in the Indianapolis area, so why should you choose Vector Cycle Works over the others?

Bike fitting is an art with a lot of science behind it.  Most fitters have a pretty wide array of tools at our disposal, and knowing which ones to use when is key.  We ask a lot of questions, listen carefully, and guide you through the process with the goal of addressing your primary needs.  Bike fitting is not about the bike - it's all about you, the enthusiastic rider looking to get the most out of their cycling experience.  Tools, methods, and knowledge are a big part of the fit session, but a lot of what makes a good bike fit is the relationship between the rider and the fitter - how well we communicate, how comfortable we are with one another, etc.  For someone who is about to invest their time and money into this process, it might be nice to meet the person with whom they are going to spend a few hours.  So, in an effort to make you more comfortable, allow me to introduce myself.

I like long walks on the beach in the moonlight...  Oh wait, wrong introduction...

First off, my name is Travis Rassat.  I was born and raised in rural Minnesota, near a small town called Waverly.  I'm proud of my small-town heritage - I believe in honesty, integrity and trust, and apply those principles to Vector Cycle Works.  In the picture above, you can see my first bike - I've been riding since I was 6 years old - I got that bike for my birthday.  That bike went through a lot - wheelies, jumps, sand, gravel, mud, you name it - it was ridden often and hard.  I learned to fix stuff at an early age, mostly because I had to make sure things were working before Dad got home, like the time I tore down our lawnmower just to see how a small engine works.  But, that's another story...  I was always wrenching on my bike, adjusting the seat and handlebars, and even at an early age, tore it down, repainted it, and put it back together.  A few times.  Curiosity and an interest in all things mechanical is in my DNA.

I moved to Indiana in 2001, got married to my wife, Keena, in 2004, and have two daughters, Natalie and Mia.  My day job is in the computer industry.  I have attended 5 different colleges, having studied mechanical engineering, computer programming, computer science, motorsports engineering, psychology, business, and music history over the last 23 years.  All that nets out to an AAS in Computer Programming from St. Cloud Technical College in 1998 and a BA in General Studies with a minor in Business from IUPUI in 2015.  I guess you could say I just love learning (or have had a really hard time figuring out what I want to be when I grow up).

If I'm not on a bike, I love hiking, camping, and doing things outdoors, especially in places like Colorado, the Boundary Waters Canoe Area in northern Minnesota, and any of Indiana's state parks or other wooded areas.  Anybody who has been to visit Vector Cycle Works has seen my drum set sitting close to the shop in my house.  I've been playing music since I was in 4th grade, although I've forgotten how to actually read music, and only play by ear and feel.  I like it better that way - it's not so rigid.  That's really just a nice way of saying that I'm a pretty awful musician.

Like other fitters, bicycling is a big part of my life, although this is where my story might be a bit different than that of other fitters;  I've never raced at a high level, been on a national team, worked in a bike shop, or worked for a bike manufacturer.  I'm just a regular dad and husband who enjoys cycling as a hobby and balances it with the rest of life.  That's not to say I am not competitive - I got into mountain bike racing around 2003, racing in a few DINO events before an old back injury (herniated disc in my back in 1996) and the birth of my kids put me on the sidelines for a few years.  In that time, I gained a lot of weight and never really recovered from the back injury.

In late 2008, when my daughters wanted me to pick them up and throw them in the air and I couldn't because of pain, I was heartbroken.  I felt like a failure as a dad and had to do something to change myself.  I was way overweight and hurt all the time.  A friend at work approached me and asked if I wanted to climb Mt. Kilimanjaro.  Around that time, another coworker coerced me into doing a triathlon.  So, around New Year's Day 2009, I started a new journey to a healthier life - I was going to swim, bike, and run my way to the top of Kilimanjaro.  My first triathlon was the Carmel sprint in April 2009.  I think I was one of the last 5 finishes in that race, but I was hooked - within an hour of getting back home, I was signed up for my next triathlon.  After a few more races, I went all in and bought a triathlon bike in 2010 - a Quintana Roo Seduza.  I am still racing that same bike today, although it has been upgraded a few times.

Since then, I've continued to lose weight, train, race, challenge myself, and explore the limits of my body.  I'm now down about 55 pounds from my peak weight, and feel a lot better, overall.  We reached the summit of Mt. Kilimanjaro in August of 2010.  I've continued to race, and you can see my results at Athlinks.  I've had some successful races, and I've had some terrible ones.  I've got a lot of great memories and stories and have enjoyed every single one of them.   I have raced triathlons from Sprints to races longer than an Ironman (although I'm not an Ironman - long story), have done a few XTERRA triathlons, MTB races, and cyclocross races.

In 2013, I was diagnosed with Systemic Lupus Erythematosus.  Along with that comes Celiac Disease, as they are related autoimmune disorders.  That has been a challenge that took over 10 years to finally reach a diagnosis, and I still struggle with it.  I deal with a lot of muscular and skeletal pain, as well as nutrition challenges.  It has made it difficult for me to train consistently.  While Lupus is not fun, I see it as something I can leverage when fitting riders on their bikes - I understand what it's like to hurt.

In October 2016, while warming up for a cyclocross race in Louisville, KY, I crashed and ended up with a severe concussion.  It took a couple of months to get back to normal, and that was a struggle and a scare for me.  Since then, I've "retired" from racing, but still continue to try to ride whenever I can.

I got an interest in bike fitting after having been professionally fit myself.  I found the process intriguing, and wanted to learn more.  After a lot of self-study and experimentation with myself and a few friends, I became BikeFit-certified and started fitting others professionally in early 2014.  Continued learning is one of the things I enjoy about bike fitting - there is always more to learn.  A few things I've picked up along the way:

I also teach BikeFit courses from the Vector Cycle Works studio, which is really rewarding.

Anyway, that's enough about me.  Hopefully, you've enjoyed hearing my story and feel like I'm somebody you'll trust with your fit.  But, I'm much more interested in hearing your story - whether you find your ride painful or are trying to find that extra little bit of speed to get a win at your next event, I am here to listen, understand, and support you in your goals.  No matter what your goals are, new rider or a long time racer, weekend warrior or pro, I hope you'll come visit Vector Cycle Works soon - I think we'll have a great time together!

Posted by Vector Cycle Works at 11:20 AM